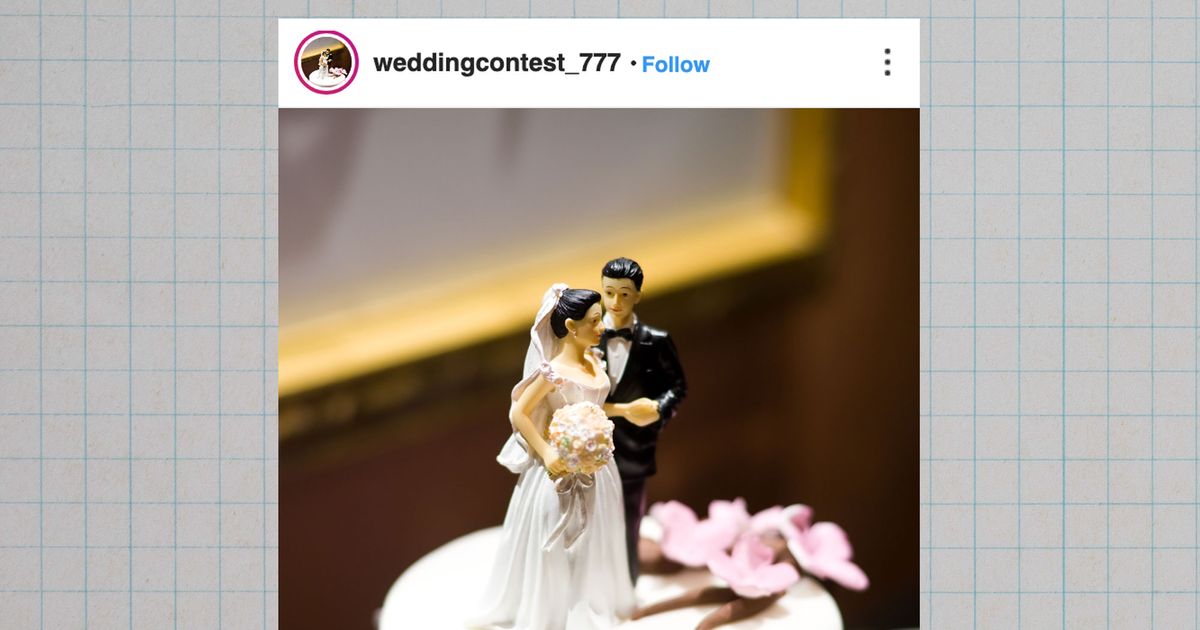 This spring, at a roadside opera house in Death Valley, I proposed to my girlfriend. It was the ideal beginning to what would become the monthslong, painstaking process of planning the best wedding we could pull off. Like many couples, our preparation involved everything from the joys of sampling cake with grandmothers to the headache of figuring out all the different ways to reserve a block of rooms at a hotel, sending out a slew of “save the dates,” paying a fortune in deposits to vendors, and knowing that at some point the bride is going to have to pick out the most important outfit of her life. With enough planning, everything was going to be perfect. And then we won a wedding on Instagram.

What happened is our friend entered us into a contest. She probably didn’t think Hey, let me alter the DNA of one of the most important days of their lives … you know, as a gift, but that is what she did. There is a beautiful venue in Los Angeles called Lodge Room, a large concert hall built in 1923 that’s been restored to all of its high-class glitz and glamor and that works with a collective of bands and DJs. These two entities decided to put on a big wedding-themed party (catering and cake included) to just sort of show off what they do and how well they do it. Then they thought, Hey, you know what would be a fun addition to a wedding-themed party? An actual wedding. And so they set up a contest for one lucky couple to get the (free) wedding of their dreams with the caveat that anyone at all could attend their nuptials with a $10 ticket.

Fast-forward until one day my wife gets a very confusing DM. Imagine coming out of the bathroom and trying to comprehend the sentence “We just won a wedding.” She may as well have said, “Well, you’re in charge of space now,” or, “Did you hear that Earth is pregnant?” Weddings aren’t something you can win. We had a lot of questions, but when life hands you lemonade, you drink it. We talked to the organizers and did some Googling to at least rule out that this was some elaborate scam. I called people close to me to see how it sounded to them. Some acted like we just won the lottery, and others just couldn’t wrap their head around what it meant. I have three best men, none of whom would be able to make it. Another groomsman happened to come over 15 minutes after we found out. He became the new best man.

It wasn’t the only change we had to adjust to. The Instagram wedding meant a lot of people, including my mom — who had family obligations she couldn’t drop at the last minute — wouldn’t be able to make it. Plane tickets are expensive, and a week’s notice is not enough time for people to change everything. It would mean I wouldn’t have a ring. It would mean my wife wouldn’t have time to get a dress and would have to make her own instead. I asked her if she really thought she could learn to make a dress in a week. She said, “I do.”

Then came the mad scramble. Lodge Room gave us a guest list so large we knew it’d be impossible to max it out in a week. We invited everyone. Our mailman RSVP’d with ten guests. That is not a joke. Friends of friends drove down from San Francisco. College friends I hadn’t seen in over a decade showed up. Friends from group therapy. A costume designer I’d met once three years ago. It was a room filled with people I care about and also people I’ve only kept up with as they change their profile picture. If I closed my eyes and thought about everywhere I’d been in life, I could open them and see every piece represented. Where most weddings are carefully balanced equations of venue capacity divided by budget minus the family black sheep plus distant relatives your mom insists on, we were encouraged to invite everyone we could. After all, the people throwing the wedding just wanted to demonstrate how good they are at their jobs!

Somehow, it all came together. With two days to go, my fiancée’s dress was unfinished. It looked beautiful, but I had no idea how someone would be able to wear it in the state it was in. Then, with what I assume is the same face Einstein made when he realized that E = mc had to be squared, she said, “If I make the bra into shoulder pads, it’ll be done.” Somehow, she was right. She had created a very personal and wearable work of art on her most important day with what everyone would agree is an unreasonable deadline. On the big day, my new mother-in-law arrived at LAX and crammed in as much wedding prep as anyone could with such short notice. Meanwhile, my newly installed best man showed up to the venue with a selection of ties because I didn’t own anything serious and thought I had until March to figure it out. I greeted as many people as I could, which bought the bride more time to get ready right up until the last minute. After the ceremony, she sang Lou Reed’s “Perfect Day” with the incredible band the organizers provided. A song that some have said is about heroin, but Lou Reed insisted was about a day at the zoo. With a top-notch light show, fog machines, and an outfit that made her as distinct as any pop star, it was magical. Everyone cried. People I’d assumed had no tear ducts bawled.

It wasn’t just close friends, either. The organizers had sold tickets to anyone who wanted to come to a big dance party. For them, the evening paused during the wedding ceremony and then went back to just being a night out. For the rest of my life, I’ll have no idea who exactly was at my wedding. (In the weeks since, we’ve since run into people we don’t know on the street who have told us how nice it was.) Strangers came up to us for the rest of the night delighting in how special it was for them. That made it more special for us, too, but I wanted to ask, “Why are you here?”

The night was as much a blur as everyone told us it would be. We got a level of amenities we wouldn’t have been able to afford otherwise: intricate flower arrangements and a raw vegan cake. When we took the stage, we were met with the screams of hundreds of guests, like rock stars. Our officiant Jason, who we met 20 minutes before guests arrived, did a well-researched and personalized ceremony that blew everyone away. My entire Dungeons & Dragons group was front and center during the vows. I walked out on the dance floor and saw people from high school dance with friends I’d met weeks before to a band so good the crowd was singing along.

Even so, we’ve been calling this our “take one wedding” and are still planning the other one for March. I have no idea when our anniversary will be, but it can’t hurt to have one more wedding and another reason to celebrate.

Get the Cut newsletter delivered daily


By submitting your email, you agree to our Terms and Privacy Notice and to receive email correspondence from us.