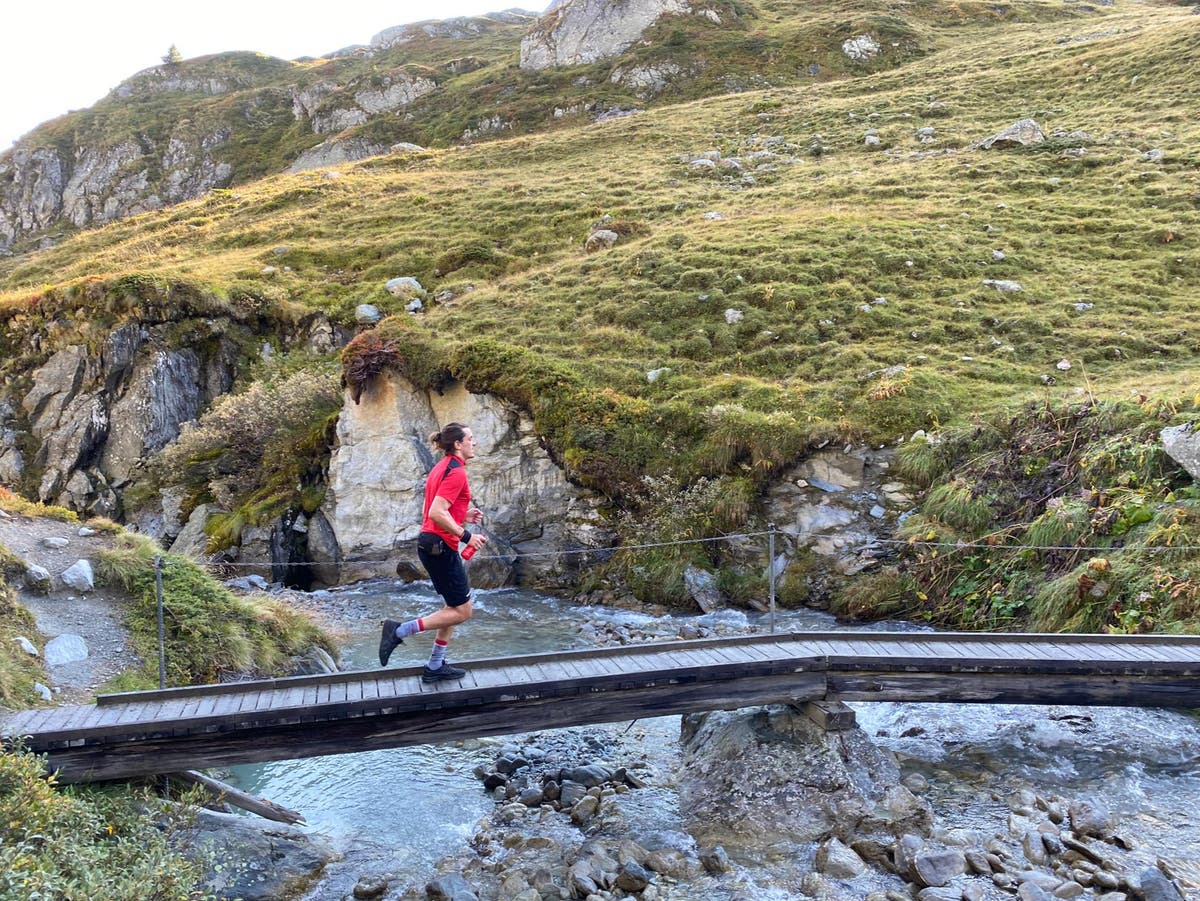 It was the first glacier I’d seen, up close that is, from the sky-skimming terrace at Cabane FXB Panossière in the Swiss Alps at Verbier. Corbassière Glacier makes quite the impression – something akin to the overview effect, when astronauts look back down at our blue marble in the void and become overwhelmed.

Perhaps that’s a little dramatic but then, running along part of the famous Verbier-St Bernard Trail will do that to a person. I say running; I really mean sporadically jogging, mostly limping, always spluttering. What a reward at the top, though. First, that view, then the sight of a table furnished with full-fat fromage, gamey saucisson and super-crunchy cornichon.

My small group and I snarfed the lot, along with a restorative mountain broth, fresh bread and more cheese. Not forgetting the speciality: blueberry pie. All chased down with a few glasses of humagne rouge. There are few more dignified ways to break up a 12½-mile mountain trail than with a carafe of rustic Swiss wine.

Inside the cabane, I saw a picture of Corbassière from the 1920s. A weathered mountaineer approached me and said it was 100 metres thicker back then. “The temperature’s rising,” he told me, with a wry raise of the eyebrows. A point not lost on Verbier resort, it would seem, which has been hard at work during lockdown investing in its no-snow proposition.

Twenty-one new signposted trails now give both experts (read utter masochists) and amateurs the chance to explore a destination better known for its powdery off–piste snow and lively après culture. A new VIP pass – free for each night you stay in Verbier – offers admission to local buses and mountain lifts (on foot) from June to October. The trails have been mapped out with the help of pro runners who live and breathe these peaks.

One such faun had the thankless task of guiding/goading me upwards that day. Serge Lattion has won the prestigious Swiss Peaks Trail, a 105-mile race. His gale-force lungs have a whopping VO2 max (the amount of oxygen you can use during exercise) of 68 and his calves look like Popeye’s.

But my resounding memory of him was that of his gentle comportment and unremitting modesty. There’s something about the mountains that has that effect. “You can distance yourself from your ego and material goods. That space provides what’s necessary to improve your wisdom,” says Sandra Rouiller, owner of BeeHeidi, a local company that specialises in trail running adventures.

She says: “That’s where I ask myself the real questions. It’s meditation, without meditating; a time for creating ideas and solving problems. Trail runners can seem a little more reserved because of that.”

Serge says that when he runs he can forget the world below for a while, which strikes me as rather a useful skill at the moment.

There’s certainly something about trail running that begets mindfulness. Yes, the surroundings are magnificent but also you have to concentrate a lot on where you’re putting your feet. “You can’t look too far ahead, which keeps your head in the here and now,” says Serge.

But he always stops to take in the view, he says: “Even while I’m racing, I don’t necessarily really race to win.” His Kodak moments on our run together gave me a merciful moment to rest and breathe it all in, too. Serge’s attuned eyes spotted flora and fauna of note. As he pointed toward an ibex, a fighter jet screamed past just above us and I had that sense of feeling pleasingly small again.

With as many calories consumed as humanly possible and my body back out of “WTF!? mode”, it was time to run the second, mostly downhill, part of the trail. If the story of ascending was that of maxing out the motor and feeling every part of my body pulse, then descending was the opposite game of knowing when to slow down. Something I’m also not very good at.

Before long, I’d developed a technique of skipping down the trails that I felt gave me an edge. I showed Serge, like an eager son to his father, who nodded politely before showing me a slightly more controlled way of doing things. He said: “You have to trust your equipment.” Once I’d accepted that my trail shoes really did grip the ground soundly, I gave it some gas. Going at speed can be pretty tough going on your thighs and ankles but how genuinely exhilarating it was to belt along with gravity now squarely on my side.

Trail running seems to be a more democratic endeavour than a wintry alternative, both in ability and budget. Though, while folks of all strides are catered for, there is a level of exertion required: “Souffrir avec plaisir (suffering with pleasure),” as a member of our group calls it. “You have to push to your limit. The memories of the day are sweeter if you try harder.”

As sweet as blueberry pie.

The Swiss Transfer Ticket covers a round trip by train between the airport/Swiss border and destination, from £112.

B&B accommodation at three-star Hotel Bristol from CHF145 (£120) per night.

For trail running excursions, customers choose the pace, duration and location of their run before being picked up at their accommodation by the trail guide who will make sure the day goes smoothly. Rates: one hour costs CHF95 and six hours costs CHF205 (CHF10 per additional person).

Verbier Infinite Playground (VIP) Pass offers free entry or discounts to more than 25 of Verbier’s top activities and attractions. The VIP Pass is delivered to every guest staying a minimum of one night in the region and paying the tourist tax. Available 1 June-27 October.