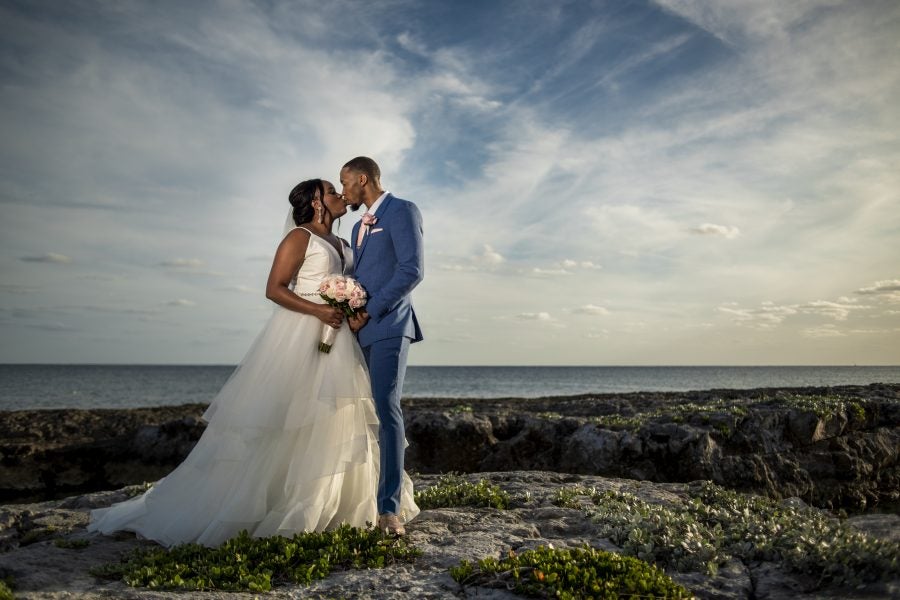 When Courtney, a travel agent owner and Michael, a barber who owns a shop in their home of West Columbia, South Carolina first became acquainted, it was through Twitter. The year was 2011 and the day of her 25th birthday. They followed each other on Twitter because they shared a mutual friend, and when she posed a question to her followers to see if they were going to be at the club her party was being thrown at that evening, he said he would make the effort to be there. He showed up after all, and when he did, he made quite the impression on her.

“From the moment I laid eyes on him, I told my friends that ‘he would be mine,’” Courtney says. “We have been in contact literally every day since that night.”

They would go on to date for nine years, build a life together and have a daughter, Zoe Alani. As the time passed, they realized the ways in which they bettered each other and the important place they hold in each other’s lives.

“Courtney and I work well together,” Michael says. “Where or when one of us is lacking, the other excels. We balance each other.”

Michael would eventually ask for Courtney’s hand in marriage in 2019, doing so in an innovative way. The couple traveled to South Africa and he planned to propose during a hike up Table Mountain. But when weather altered his plans, he opted for a flawless Plan B.

“One evening we had [an] authentic African dinner while visiting the township of Khayamundi. The host asked for a volunteer and I volunteered. She proceeded to dress me in African garments and explained their marriage traditions,” Courtney says. “As the host finished, she asked me, ‘Are you married?’ I replied, ‘No.’ She then asks, ‘Why not?’ and before I could reply, Mike was kneeling with a beautiful ring and asked me to marry him. None of this was planned but it was perfect.”

As the couple started putting together plans for their big day, the hodophiles (people who love to travel) knew that a destination wedding was in the cards. And while the Covid-19 pandemic would make things complicated in the months leading up to the wedding, it wouldn’t keep their celebration from being one to remember. On January 16, 2011, at the family-friendly and beautiful Hard Rock Riviera Maya in Mexico, Courtney and Michael said “I do” in front of 53 close friends and family.

“For a few days, we were able to escape the worries of Covid and relax a little and have fun celebrating not only our marriage but life itself,” Courtney says.

See all the charming images of the couple’s celebration of love and life, how they pulled off a safe and successful destination wedding and learn how married life is going for them so far.

Groom Concierge Service – Beyond the Tie

Want your wedding to be considered for feature in Bridal Bliss? Email us a few wedding photos and the story of your big day at [email protected]

How The Bride Knew She’d Found the One

“Michael puts me first in all things. He is loving, giving, and most of all respectful,” Courtney says of her groom. “He supports me, motivates me, and offers constructive criticism when I need it. When we had our daughter, Zoe Alani (pictured), this solidified everything for me. He is everything that a mother would want in a father. The way he loves Zoe and I is unconditional.”

The bride made quite the striking entrance as she prepared to walk down the (sandy) aisle.

“We decided that we didn’t want a traditional church wedding and we wanted a small intimate group of people attending,” Courtney says. “Mike and I love to travel so we saw it fitting to have a destination wedding. We chose Hard Rock because we wanted a fun, family friendly resort.”

The couple’s daughter, Zoe Alani, was the adorable flower girl for the festivities.

Planning During the Pandemic

While the couple never planned to cancel their destination wedding in Mexico, they prepared themselves for the reality that they might need to postpone it. Spikes in cases were causes for concern in the months leading up to the celebration, but they had a plan.
“We recommended that all guests get a COVID test prior to traveling even though it wasn’t required,” Courtney says. “I also prayed the same prayer every day for weeks asking God to protect everyone as we traveled. All 53 guests traveled to and from Mexico without one person getting sick.”

The couple plant big kisses on their daughter, Zoe Alani, after the ceremony.

The Most Memorable Moment for the Bride

“The whole weekend was an experience. It felt like one big family reunion,” she says. “My family/friends and his family/friends interacted like long-lost cousins. It was great to see everyone mingling and enjoying themselves. And the reception was lit. Shout out to DJ Louivee. We chose DJ Louivee because he was the DJ the night we first met. We partied like we were in college.”

The Most Memorable Moment for the Groom

“My most memorable moment was sharing a dance with my mother,” Michael says of the emotional dance he shared with his mom. “My mother has been my biggest supporter all my life.”

A Chuck Taylor-wearing bride and groom let their hair down and had some fun with the garter belt removal tradition.

The Jacksons (yes, his name is Michael Jackson) puckered up for this gorgeous shot by My Blue Weddings photographers, Gisselle Gonzalez and Alex Rojas.

The Perks of a Pandemic Destination Wedding

“Traveling during the pandemic, I believe, allowed the group to appreciate the time away more and enjoy the moment with us,” Courtney says.

A major perk to marrying at the Hard Rock Riviera Maya was there was so much natural beauty to capture as the backdrop to Courtney and Michael’s wedding album.

Life As the Jacksons

When asked about how they’re settling into marriage, Courtney says it’s going really well.
“We view our marriage as a partnership or as a team,” she shares. “For example, when one of us is overwhelmed, we try to share duties. We are learning to make adjustments daily.”

What the Future Holds

“We look forward to a lifetime together of love and travels around the world,” Michael says.