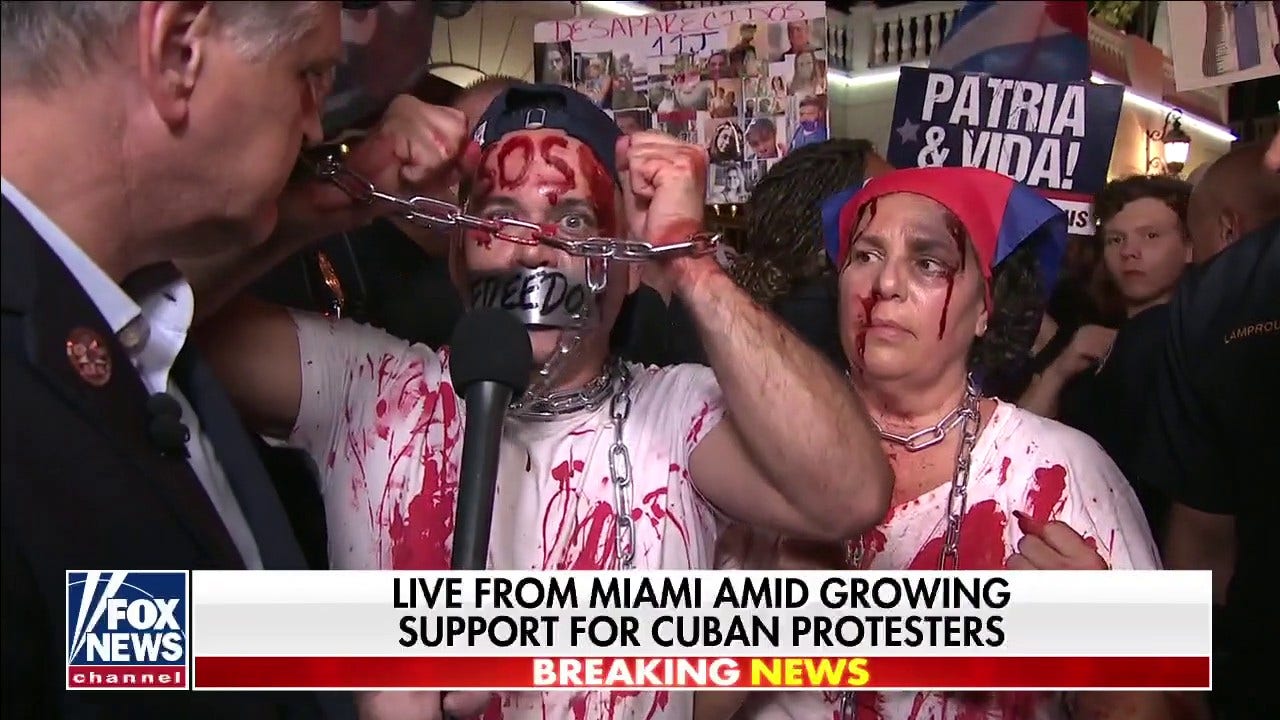 A Little Havana, Fla., demonstrator covered in theatrical blood; gagged, handcuffed and chained told “Hannity” on Wednesday that his attire is a euphemism for the plight of the Cuban people who have suffered under 62 years of dictatorship – as well as a cry for help to a president he said seems uninterested in supporting Cuban civilians’ rights.

The man, who did not give his name, spoke through “Freedom”-embossed duct tape.

The man said the United States must stand with the civilians of Cuba and not with Miguel Diaz-Canel’s autocratic rule, which he has held since younger Castro brother Raul, 90, ceded power to him in 2018.

A woman standing next to the man in similar attire reiterated his call: “The only vaccine the Cuban people need is freedom – please help!”

Host Sean Hannity turned to a delegation of Florida lawmakers standing beside him, and asked what they have heard or asked of the Biden White House in this regard.

Rep. Maria Elvira Salazar, a former Telemundo journalist who represents Miami Beach, Brickell, and the Little Havana neighborhood “Hannity” was visiting, said she has asked Biden for a meeting as many as “three times a day” to no response.

“We are very frustrated, we are very upset: because we have called respectfully and told Biden administration that this has nothing to do with political parties. He will not meet,” she said.

Salazar’s seat is notable in that regard, as hers is one of few Democrat-majority districts that flipped Republican in 2020 – when the longtime news anchor defeated former Clinton Foundation President Donna Shalala.

Sen. Marco Rubio, R-Fla., who like Salazar is of Cuban ancestry, said that the world cannot forget the plight of the Cuban people, and that the activism in support of them “cannot stop until Cuba is free and has liberty.”

Miami Republican Mayor Francis X. Suarez added that the entire Western Hemisphere is impacted by the Cuban regime and its oppression.

“The Cuban people have no means to defend themselves,” he said. “It’s so sad to see a lack of U.S. leadership.”

HANNITY SHOWS SUPPORT FOR CUBA’S FIGHT FOR FREEDOM: ‘THEY SHOULD BE LIVING IN PARADISE’

Demonstrators have flocked to the landmark Versailles Restaurant, at the corner of Calle Ocho and S.W. 36th Ave., where “Hannity’ was filming, for weeks now – in protest of Diaz-Canel’s treatment of Cubans and in support of pro-democracy demonstrators now being targeted, arrested and punished by the regime.

The Versailles corner has been a rallying point for the Cuban-American community for decades, as it is also where celebrations popped up in 2016, as demonstrators celebrated dictator Fidel Castro’s death.

The White House was criticized after press secretary Jennifer Psaki, in calling the regime a failure, remarked that “a lack of access to economic opportunity, to medical supplies, to COVID vaccines” are all reasons for the historic protests.

Critics countered that the true cause of the protests is the proliferation of Communism and left-wing governance on the island that has led to economic depression and recision of basic rights for the people of Cuba.

In a statement on July 12, Biden said the White House “stand[s] with the Cuban people and their clarion call for freedom and relief from the tragic grip of the pandemic and from the decades of repression and economic suffering to which they have been subjected by Cuba’s authoritarian regime.”