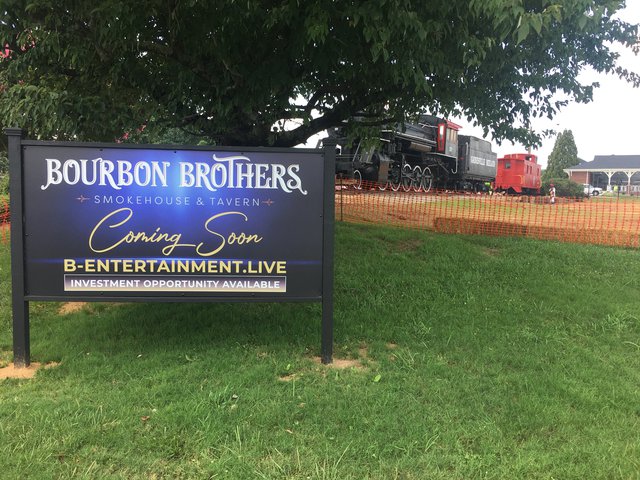 The 1.7-acre property, which currently holds Engine 209 Park and a parking lot, is off Jesse Jewell Parkway, West Academy Street, Broad Street and Maple Street and was rezoned from general business to central business with a special use for an event center.

The development will still hold a 15,000-square-foot concert and special event venue and share the site with a 9,000-square-foot Bourbon Brothers restaurant, with a 1,500-square-foot rooftop bar and an outdoor patio area, according to city planning documents. B Entertainment plans to hold 100 to 120 ticketed shows and an additional 100 events such as weddings, conventions, sporting events and proms, per year.

The new site plan, presented Tuesday by B Entertainment’s Chief Operations Officer Robert Mudd, showed an L-shaped joining of the venue and the restaurant in which the venue would face Jesse Jewell Parkway and abut Maple Street on the south and east sides of the property respectively, and the restaurant, including its rooftop bar area, would sit at the corner of Broad Street and Maple Street. Forty parking spaces would be located on the west side of the property near West Academy Street.

B Entertainment introduced a new condition for the property that would allow The Arts Council to request no amplified sound from the entertainment venue on five Fridays and 10 Saturdays each year, as long as they would provide at least eight weeks notice.

Certain aspects of the agreement were not honored by the city, resulting in the city paying a $100,000 penalty to The Arts Council in June.

At the meeting Tuesday, Matt Reeves, a lawyer representing The Arts Council, said the new site plan was a significant improvement but still not enough to warrant their support. Reeves asked the City Council to table the application to provide more time to work on the site plans and other conditions, including honoring the 2018 land acquisition agreement.

Councilman Zack Thompson said after the meeting he had met with The Arts Council’s executive director, Gladys Wyant, multiple times regarding the development and felt the adjusted site plans helped respond to some previous concerns, such as reducing noise interference. The project would likely attract people from surrounding areas who would get to see Gainesville’s downtown, Thompson said.

The venue would seat up to 500 people and could fit 1,400 people when tables are cleared out, Mudd said, though 90% of shows will be seated. It will be designed to fit a historic, downtown Gainesville look with a brick exterior, Mudd said. About 20% of ticket sales are expected to come from outside of Gainesville, he said.

B Entertainment plans to start construction soon and celebrate groundbreaking on Oct. 1, Mudd said. They plan to complete the project by August 2022.