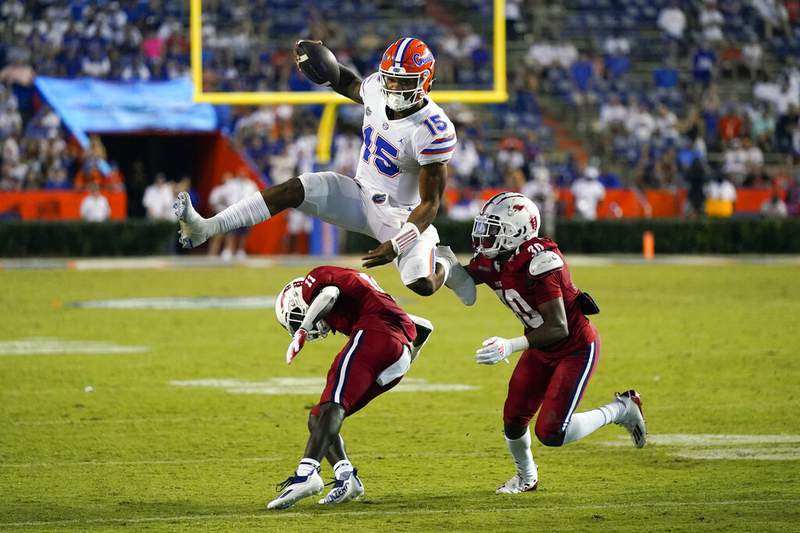 Now we’re totally not looking ahead to that huge game against defending national champion Alabama next week and instead focusing on this week’s visit to Tampa to face South Florida.

🏈 Win over FAU puts QB situation in even bigger spotlight

So while the game was never in doubt, Florida’s 35-14 win over Florida Atlantic in the season opener did raise some questions about the quarterback position.

Emory Jones got off to a strong start, capping the opening drive with an option pitch to Dameon Pierce for a score, and then making it 14-0 with a screen pass to sixth-year senior Rick Wells from Jacksonville’s Raines High School. But Anthony Richardson looked more ready for the spotlight. He ran seven times for 160 yards, including a 73-yard score late in the game and an 11-yarder in which he broke three tackles and hurdled another defender. He completed 3 of 8 passes for 40 yards.

Jones, on the other hand, completed 17 of 27 passes for 113 yards, with a touchdown and two interceptions. He also ran for 74 yards.

In this episode of Gators Breakdown, host David Waters breaks down the Gators’ performance in the opener. He discusses Jones’ struggles, hits on the success of the run game overall and discusses the up-and-down performance of the defense.

Coach Dan Mullen insists there’s no quarterback controversy. But there’s no doubt Richardson raised eyebrows last week and left fans wondering what else he can do.

David and Will Miles, with Read and Reaction, dive into the quarterback conversation themselves in another Gators Breakdown episode.

🐂 Gators head to Tampa to take on USF

We’ll get a chance to see what else Richardson can do on Saturday when Florida and USF meet for the first time in Tampa.

Kickoff at Raymond James Stadium is at 1 p.m. While the Gators are on the road, I’m sure plenty of Florida fans will be in attendance.

The Bulls lost 45-0 at North Carolina State in Week 1, so this should be a pretty easy win for the Gators in what they hope will be a tune-up game before opening Southeastern Conference play against the Crimson Tide.

Mullen will be going for his 100th career victory, a milestone that only 173 men have reached in college football history.

For Zach Carter, who was named SEC co-defensive lineman of the week, the trip to Tampa is a homecoming. In fact, he has been pleading with teammates to help him get enough tickets for his family and friends.

Join David for the latest episode of Gators Breakdown as he previews Saturday’s game and his outlook for Florida position by position.

Gators to wear special helmets in remembrance of 9/11

With Saturday marking 20 years since the attacks on Sept. 11, 2001, the Gators will wear special helmets to commemorate the date and honor first responders and those who died on 9/11.

On Thursday, Florida unveiled this week’s uniforms, which you can view here.

They feature white helmets with a patriotic Gators logo, along with white jerseys and white pants.

The Gators will be back in The Swamp in what’s sure to be an electric atmosphere as they host Alabama at 3:30 p.m. Sept. 18.

Florida’s ticket office announced Wednesday that the game is sold out. Fans are encouraged to arrive early as all gates will now open two hours before kickoff.

The game kicks off the SEC game of the week slate on CBS.

The Gators remained at No. 13 in The Associated Press Top 25 Poll despite three teams — Clemson, North Carolina and Wisconsin — ahead of them all losing their games.

While it’s understandable Clemson only dropped from No. 2 to No. 6 after losing to Georgia, Iowa and Penn State both jumped ahead of Florida after their wins over Indiana and Wisconsin, respectively.

The big takeaway from the new AP Poll was Georgia’s three-spot rise to No. 2 following its 10-3 win over Clemson in which the Dawgs failed to score an offensive touchdown. With Alabama remaining at No. 1 after the Crimson Tide’s dominating 44-13 win over Miami, it’s the 30th time the SEC has had the two top teams in the country.

Meanwhile, the Gators moved up two spots from No. 11 to No. 9 in the USA TODAY Sports AFCA Coaches Poll released Tuesday.

You can see the new Coaches Poll in its entirety here.

📺 Here are some Week 2 matchups to watch

At noon, No. 3 Ohio State will host No. 12 Oregon at the Horseshoe. The Buckeyes and quarterback C.J. Stroud shook off some earlier shakiness in their season-opening 45-31 win over Minnesota last week. The Ducks, meanwhile, had a close 31-24 win over Fresno State. Oregon coach Mario Cristobal said defensive end Kayvon Thibodeaux — who’s possibly one of the top picks in next year’s NFL draft — is still day-to-day heading into Saturday’s game after injuring his ankle in the first half last week.

And at 4:30 p.m., we have No. 9 Iowa State hosting No. 10 Iowa in the first top-10 Cy-Hawk game. ESPN’s College GameDay is in Ames for the rivalry game, and cyclones coach Matt Campbell is looking for his first win over the Hawkeyes. Iowa State narrowly escaped an upset last week and staved off Northern Iowa 16-10, while Iowa dominated in a 34-6 win over Indiana.

The first SEC matchup of the season and the only one this week is Missouri at Kentucky, with kickoff at 7:30 p.m. The Tigers are coming off a 34-24 win over Central Michigan (which was without former Florida coach Jim McElwain, who underwent an emergency appendectomy and did not make the trip), while the Wildcats showed off their new pro-set offense in a 45-10 rout of Louisiana Monroe.

Other notable games matching SEC schools against Power Five teams include No. 5 Texas A&M against Colorado in Denver at 3:30 p.m., Arkansas hosting No. 15 Texas at 7 p.m., Tennessee hosting Pittsburgh at noon, and Mississippi State hosting NC State at 7 p.m.

In other national college football news, the Big 12 is moving to quickly to add new schools with the upcoming departures of Texas and Oklahoma to the SEC.

Trustees at Central Florida and Cincinnati have called special meetings for Friday related to conference membership. Both of those schools have been identified as potential Big 12 members, along with BYU and Houston.

A person familiar with the Big 12′s expansion plans told the AP that conference presidents are scheduled to vote on applications for entry into the league at a meeting Friday.

The SEC announced its men’s basketball league schedule on Thursday.

Florida will open its conference campaign in Oxford against Ole Miss on Dec. 29 and close at home against Kentucky on March 5.

The Gators and the Bulldogs will face off in an exhibition baseball game at 121 Financial Ballpark in Jacksonville the night before the annual Florida-Georgia football game this fall at TIAA Bank Field.

The baseball game is scheduled for Friday, Oct. 29, with the first pitch happening at 6:30 p.m.

The Florida and Georgia baseball teams previously played each other in Jacksonville in fall 2019. Florida won that matchup 5-3.

The Florida baseball team’s fall season will run from Oct. 12 to Nov. 23 and also includes an exhibition game against Georgia Southern on Oct. 23.

David and I want to hear from you. Do you have any thoughts or questions about the Gators football program? Agree or disagree with something we’ve said? Let us know here and we’ll share our responses to your questions.

You can catch up on previous episodes of Gators Breakdown at news4jax.com/gatorsbreakdown. Or click one of the following to tune in: Megaphone | Apple Podcasts | YouTube | Google Podcasts | Stitcher